Here are the other 2 posters...
You do not have the required permissions to view the files attached to this post.
Top

If one of these posters is based on "I Love Rocky Road" then I guess this means we'll be getting the same abridged/shortened version of the unplugged medley he performed on last year's tour.

If he's bringing back costumes, he's probably going to want to do Amish Paradise & Smells Like Nirvana in full as costumed numbers again.

If he's bringing back video screens, he can show the Don Pardo clip from the I Lost On Jeopardy video again (with those two songs plus White and Nerdy edited out to make room for it).

If he's bringing back costumes and playing Jurassic Park in full this tour, he might want to do that song back to back with the MF tour acoustic medley so he can wear the same flowy white shirt he wore for both those numbers (I seem to remember seeing footage Al wearing a flowy white shirt while singing Jurassic Park on the Alapalooza & Bad Hair tours and in the latter he did JP before the Bad Hair medley without any video transitions. He just ran back stage to throw off that shirt real quick underneath which he was wearing his normal black medley tee).
Life is a bowl of three-legged salamanders swimming around in an infinite ocean of strawberry jello...
Top

You know, I'm thinking the artists who designed the tour posters just had free range over the design, which don't have anything to do with the setlist. The more I think about it, the more it seems unlikely that songs like Albuquerque would actually be performed on this tour. I don't think the posters are any indication on what will be performed (although I do agree with the abridged Unplugged Medley prediction)
"Be the climate, not the weather." -Al Yankovic
Top

Al just tweeted out two new designs for two more posters being sold for specific shows on this tour that I haven't seen posted here yet. One references DTBS and another references Perform This Way.

At this point, I'm starting to think that Al will just be performing all the same songs he did at the 2016 Hollywood Bowl shows but with "new" songs like Jackson Park Express, Weasel Stomping Day, Jurassic Park etc being used to fill in the gaps and bring the setlist up to the full length of one of his regular concerts.since he won't have any opening acts to cede any time to or shorten his own setlist for.
Life is a bowl of three-legged salamanders swimming around in an infinite ocean of strawberry jello...
Top

And we should get another new one tomorrow - he's posting each poster 2 weeks before the actual show. So it'lll be a lot of fun to see them coming out all summer. Plus it's quite the new item to collect.
Top

Killingsworth wrote:At this point, I'm starting to think that Al will just be performing all the same songs he did at the 2016 Hollywood Bowl shows but with "new" songs like Jackson Park Express, Weasel Stomping Day, Jurassic Park etc being used to fill in the gaps and bring the setlist up to the full length of one of his regular concerts.since he won't have any opening acts to cede any time to or shorten his own setlist for.

IIRC, he said that the show would be roughly 50% the same as the Hollywood Bowl show, 50% different. That means about 7-8 songs from the Hollywood Bowl. According to all the information we currently know, songs (from that tour) that are confirmed are: If that 50/50 splits were exactly right, that means there would need to be some cuts to round out the number (The Saga Begins, Yoda, Smells Like Nirvana, Acoustic Medley). However, I think it might be more like a 70/30 split.

That would mean about 5 new songs, "a couple" of which Al said were not even performed on the Vanity Tour. I would slate them as such:
"Be the climate, not the weather." -Al Yankovic
Top

On "Little Al's" instagram today, I saw this in the corner of a video. For a 90 minute show, I would guess that there are 2 possibilities: 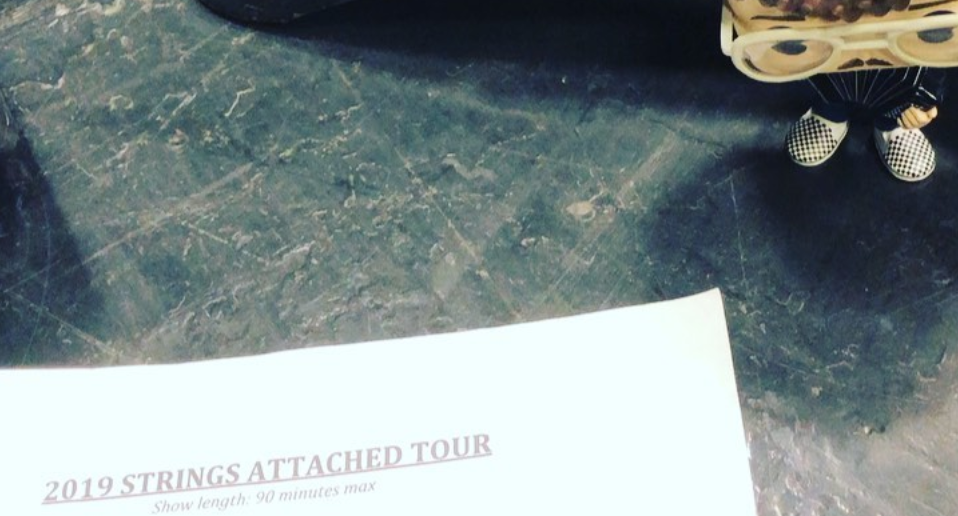 It'll be interesting to see how this plays out. ONE WEEK LEFT!

"Be the climate, not the weather." -Al Yankovic
Top

Has anyone figured out how the VIP is working for this tour yet? IMHO CID kind of dropped the ball last year. Communication from them (at least for me) was pretty suspect.
I assume all of extras we'd pick up at the venue. But what about when the doors open for VIP?
Top

We're starting to get our first look at the stage setup for tomorrow night (and presumably most of the tour). From the looks of it, it doesn't seem that Al has a whole lot of room to move around, because BOY is that stage crowded!

I also found an instagram post from one of the orchestra musicians, where they have a sheet of music that is titled "Amish Vamp". I'm pretty sure that is the same outro music they used for the Mandatory World Tour, so that confirms that Amish Paradise is the last song in the normal set.
https://www.instagram.com/p/ByTBhvaplVD/" onclick="window.open(this.href);return false;

EDIT: Jim posted a similar photo (albeit closer up), and based on the three sets of red pom poms sitting on the center stand, I'm gonna say that the three backup singers will be taking the role of the SLN cheerleaders this tour!
"Be the climate, not the weather." -Al Yankovic
Top

I hope Al will be okay, there doesn't seem to be enough room for him to get in and out for costume changes. - I'm pretty sure it's been confirmed he is, but I'm just saying, it looks like it will be a tight squeeze.
Top
Post Reply
192 posts